If your training instances do not represent the right proportion of different values of the learning attribute, then you could hardly expect an ML classifier learned from that data to perform well on the new examples. In such cases, you may want to adjust your training sets by removing some outliers and/or adding more representative training instances. It can be done by so called “Trainer”.

Trainer – a Simple Example. The standard sample project “Credits” provides an example of how a rule-based Trainer can be implemented. This sample uses hypothetical German credit data set which contains sample of 1000 debtors classified as “good“ or “bad“.  It’s initial Glossary looks as follows:

The “project.properties” are specified as follows:

It will run RIPPER against all 1,000 training instances and it will generate rules

which will incorrectly classify 244 instance out of 1,000.

Now, let’s assume that we want to filter these training instances to use only foreign workers who are older than 30. First, we will add to the glossary a new business concept “Filter” that has two arrays of TrainingInstances (see yellow lines): 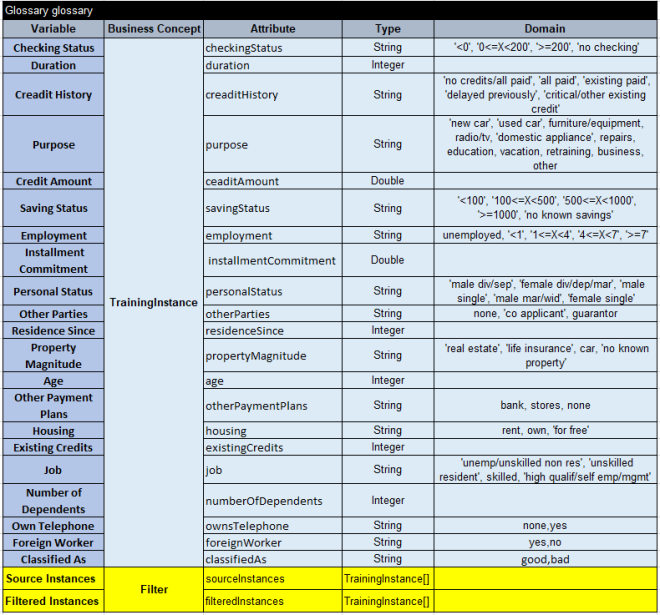 To create an array “Filtered Instances” from the array “Source Instances” we will use the following filtering rules:

to the array “Filtered Instances”. For those who knows how to use OpenRules, this is a regular way to deal with collections of objects.

To make sure that we will use this Filter before running Rule Learner we will create a new Java launcher “LearnerWithTrainer.java” that looks as follows: 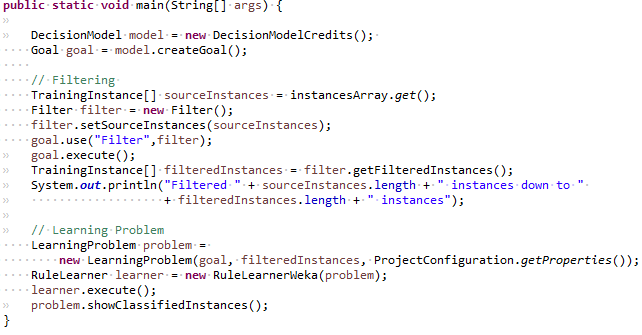 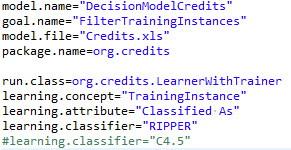 Now instead of “learn.bat” we can run the standard OpenRules “test.bat” to execute the run.class “LearnerWithTrainer”. First, it will execute our Filter producing 606 filtered instances, and then it will run RIPPER against these instances to produce the following classification rules:

Of course, now a subject matter expert can create training (filtering) rules of any complexity, and the same schema with a rules-based trainer will continue to work!